Sound It Out – Review 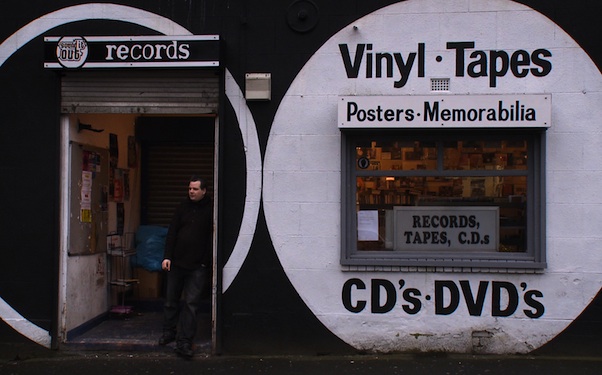 First Appeared in Left Lion in December 2011. Over the last five years, an independent record shop has closed in the UK every three days, Sound It Out is a documentary about the last record shop on Teesside. The subject matter may be as far from a ‘blockbuster’ as it’s possible to get, but go and watch it; truly, you’ll be Transformed. Based at The Broadway, director Jeanie Finlay was born in the film’s setting, Stockton. In Sound It Out, thankfully, she has avoided the temptation to draw lazy metaphor with the region’s decline, delivering instead, a purposely small and personal film. “Personal film”: a phrase that strikes Sophia Coppola-shaped dread into the heart of anyone who hears it. Thankfully, Sound It Out never gets lost in translation. Finlay avoids a party political broadcast for the People’s Republic of Teesside and grand socio-economic point-scoring. The indie director retains, instead, a sense of detachment allowing her to focus on the human scores of the fascinating characters involved. Affable vinyl-savant and shop owner Tom Butchart is one part John Peel, one part Norris McWhirter. As he peddles 33rpm to (largely male) customers from every musical subset, his elephantine music knowledge is compared to addiction – Sound It Out as needle exchange, if you like. John Boy wants Makina; Gareth and Sam want ‘anything ending in metal’ (or Piss Christ); DJ Dick and The Shed Crew are online DJs broadcasting to the world and Chris owns six or seven different versions of David Bowie’s Changes (he covets the ones with typos). This auditor’s collection is anything but sixes and sevens – categorised down to alphabet, date, box and lovingly replaced after every play. There’s the irrepressible, and possibly refreshed, man who bounds into the shop to get whatever he’s just heard on the local pub jukebox – Tom usually has it in his hand within seconds. alt text Shane – possibly the biggest Quo fan in the world Obsession, love, commitment, belonging, Sound It Out has it in droves, but meaning? Meaning comes in the form of the film’s star, Shane. If we’re all looking for meaning through music, art, cinema et al, there’s something beautifully compelling, insightful and sobering about a man, self-confessedly on the edge of society, who has found it in the most unlikely of places. Shane’s obsession with Status Quo, a band and a phrase that sonically and metaphorical represents simple contentment, lies at the heart of Sound It Out. While cinema strives to light brighter, louder, bigger and more expensive celluloid fireworks, it’s pleasing to be reminded that its heart lies in unearthing human stories, not alien robots. The Transformation? I challenge you to watch Sound It Out and not wonder which of your family still has a record player, and where is that box of albums? You’ll be left feeling that for all the convenience of virtuality, for all the fawning over Steve Jobs’ homogeneity, and even all the water-cooler bonhomie of The X-Factor, we’ve lost something along the way; the wonderful sense of anticipation and ownership that unsleeving music provides.
14th February 201810th April 2018 paulscottreaney 1 1890 Views